Skip to content
Coming from Chicago, much of our architecture originates around 1830 – so coming to Boston and Harvard, with buildings dating back to the 1600s and 1700s, was a refreshing dip into history.
As part of a WITS tour group led by Jolanta Davis of the Casual Traveler, I had a great historical perspective with the stuff I love most: Quirky facts that make it more real.
Highlights of my visit to Harvard Old Yard are below, but I’d recommend a Harvard tour or an audio tour, so you can get a better sense of it all. Be sure to stop at the Harvard Art Museum as well – all of this can easily take a day and it’s a fast ride on the T to Cambridge!

The Johnson Gate, the main and first gate to Harvard, is traditionally only entered as freshmen are driven in, and exited as graduates leave after their ceremony. So most people actually use the side gate to travel in and out of Harvard’s Old Yard. 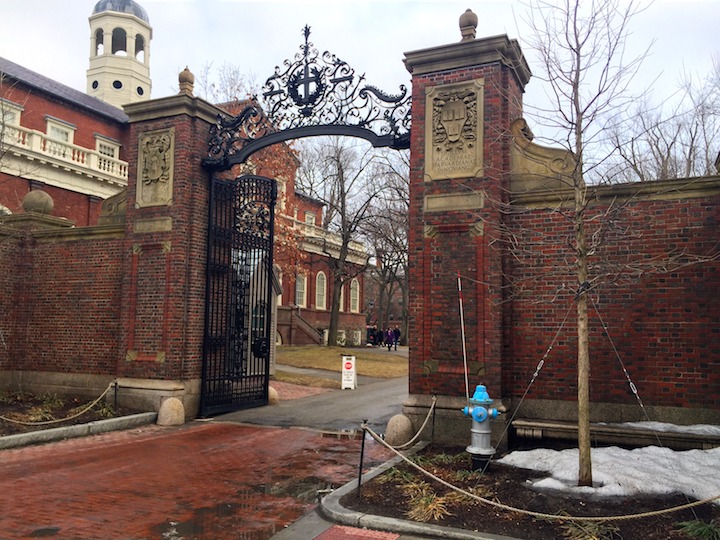 The guardhouse, a tiny addition in 1983, was $21,000 itself because of all of the requirements of the Cambridge Historical Commission.

The Old Yard is a mix of different architectural styles over the years, as it grew and became an “Old Yard.” Massachusetts Hall, built around 1720, is the oldest surviving Harvard building and the second oldest university building in the U.S. Designed as a dormitory, it’s been used as lecture rooms and laboratories. Harvard was forced to turn it and other buildings into housing for the colonial troops, who reportedly removed all of the doorknobs and melted them down into bullets. The university petitioned the Continental Congress to cover damages caused by the troops and actually received compensation, including the cost of replacing 27 brass doorknobs and 62 rolls of paper. 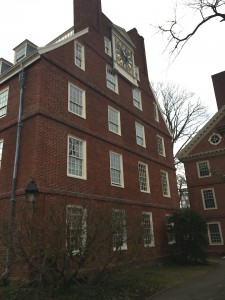 Matthews Hall, an impressive Neo-Gothic building, also has a plaque commemorating the Indian College, which stood from 1655-1698, trained young Native Americans as ministers and missionaries free of charge. There are still excavations to find the exact location of the Indian College, along with its artifacts. It also housed the first printing press in the U.S.

John Harvard, whom the school is named for because of a £400 donation (about $85,000 in today’s dollars), was memorialized in a statue, though it’s not really him. There are no known images or descriptions of what John looked like, so the sculptor, Daniel Chester French, used a student as his model. You’ll notice his left shoe is quite shiny – legend has it that you can do well on exams if you rub that shoe. 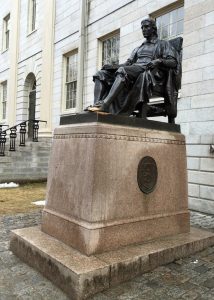 Another quick visit should be the Science Center. Though it didn’t wow me architecturally, I was excited to see the world’s first programmable computer, the Mark I, and Grace Hopper’s working textbook she created for it.

The College Pump is a standby in the Old Yard, a replica of one of the three that students used for drinking, cooking and washing water.

The Memorial Transept was built as a beautiful tribute to those from Harvard who died fighting in the Civil War for the Union. Definitely worth a look around this gorgeous space.

The Widener Library is a marvel not only for being the donation of Mrs. Widener, the mother of Harry Elkins Widener, who perished with the Titanic and was a great collector of first edition books. They’re now housed in his study, along with a Guttenberg Bible.